HMS Caroline is a decommissioned C-class light cruiser of the Royal Navy that saw combat service in the First World War and served as an administrative centre in the Second World War. Caroline was launchedand commissioned in 1914. At the time of her decommissioning in 2011 she was the second-oldest ship in Royal Navy service, after HMS Victory. She served as a static headquarters and training ship for the Royal Naval Reserve, based in Alexandra Dock, Belfast, Northern Ireland, for the later stages of her career. She was converted into a museum ship. As of October 2016 she is currently undergoing an inspection and repairs to her hull at Harland and Wolff and therefore can’t be visited at present.

Caroline was the last remaining British First World War light cruiser in service, and she is the last survivor of the Battle of Jutland still afloat. She is also one of only three surviving Royal Navy warships of the First World

War, along with the 1915 Monitor HMS M33 (in Portsmouth dockyard), and the Flower-class sloop HMS President (1918), (formerly HMS Saxifrage) moored on the Thames at Blackfriars.

Patterson Protective Coatings Ltd are delighted to have been the main paint suppliers on the major refurbishment (£12M) of the WWI War ship HMS Caroline. The ship has been moored in Belfast since the 1920’s having previously seen war action in the Battle of Jutland in 1916. the ships last major refurb. was carried out back in the 1950’s. This short video from the main Contractors on the job “Blu Marine” give a great insight to the history of the ship and the care to detail that has been afforded in this major refurbishment. Jotun Paints were used on the project namely Jotamastic 80 Epoxy and Hardtop HB Polyurethane.

This author hasn't written their bio yet.
Darren Cardy has contributed 2 entries to our website, so far.View entries by Darren Cardy

Jotun’s Magic Colour Eye is an excellent tool for colour[...] 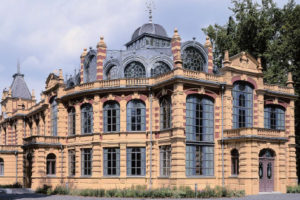 External Bituminous Waterproofing with Remmers. It is always essential to[...]